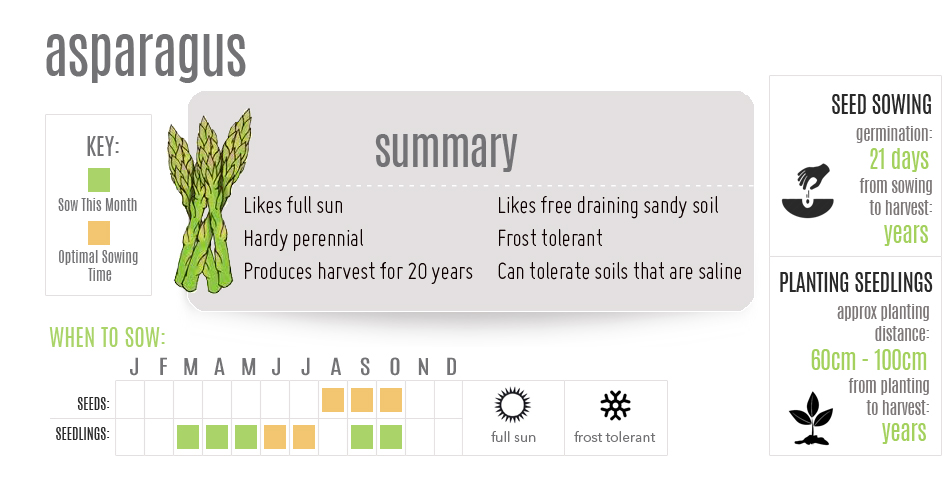 A tall plant of the lily family, with fine, feathery foliage.  Asparagus is cultivated for its edible shoots.  The tender young shoots of the asparagus plants are eaten as a vegetable.  Once the buds start to open (“ferning out”), the shoots quickly turn woody.

Asparagus loves sunshine. It is frost tolerant and deal for regions with cool summers and cold winters.

Asparagus naturally grows in coastal dunes around the Mediterranean and so a free-draining, sandy soil is an absolute necessity for guaranteed success.  The soil needs to be deep; ideally just over knee-deep. Enrich the soil with a generous amount of weed-free, well-rotted organic material. 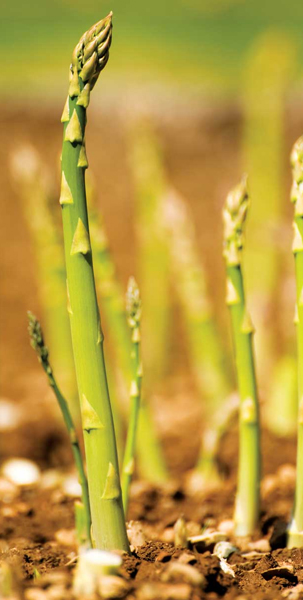 If you have lots of patience and know that you are going to be living where your asparagus bed is being planted for many many years, then sowing asparagus seed is a good option for you.  A good tip is to soak the seeds in water for a couple of hours before planting.  You will find that this will help to speed up the germination process considerably.

Sow the seeds in the prepared bed they are to end up in.  Don’t dig the trenches, just get the bed nice and flat and rake it over to get a nice, fine soil for planting the seeds in.  Sow the seed thinly – about  2-5cm deep and water well.  When they are about 15cm tall, thin them again to about 30cm apart.

Asparagus crowns can be planted in winter and spring.  Prepare the bed as early as possible and enrich it with manure, compost or bonemeal.  Dig a trench the length of your bed that is about a hand’s length deep and two hands’ lengths wide.  Mix the topsoil that has been removed with organic matter, and spread about 5cm of the mixture in the bottom of the trench.

Spread the roots across the soil so that they radiate around the crown like rays of the sun. Back-fill to cover the crowns so that they are buried about a thumb’s depth beneath the soil.  They will appear to be semi-buried at the along the bottom of your trench. As the stems start to grow keep covering them back up until the trench has been filled.

The crowns should be kept weed free and watered during dry weather. Shoots will start to appear and these should be left to grow and open to ferny foliage. Asparagus is a fern that needs to grow out and capture all the sun it possibly can its first two years to store up energy and build its root system for future production. The more time you give your plants to establish themselves in the first 2-3 years, the longer and heavier they will bear.

Cutworms:  These cause damage by eating off the part of the spear underground.  As a result, the damaged spear develops with a crooked tip.  Utilize control methods.

Asparagus Beetle:  Both the adults and larvae attack asparagus spears and ferns. The beetle eats the tips of the spears as soon as they emerge from the ground.  Adult beetles lay eggs on the spears which are impossible to wash off.  A useful companion plant for asparagus are tomatoes, which repel the asparagus beetle, while asparagus may repel some harmful root nematodes that affect tomato plants. 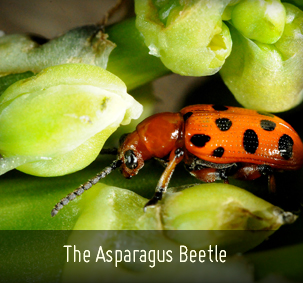 Asparagus is one of the earliest vegetables from the garden in spring. Knowing when to pick asparagus will result in the most flavourful experience from your crop.

In the third year of growth, spears of plants will be ready for harvesting. During this initial harvest, plants should only be harvested for a period of 4 weeks. Removing the spears for more than a month during this important year of growth will weaken and possibly kill the plant.

Asparagus harvesting should begin when the stems are roughly 15cm to 20cm long and about finger-width in thickness. Length may dictate when to pick asparagus, but you will want to get it early enough in the season that it is tender.

Simply cut or snap the spear off at the soil line.  The small stub that is left in the soil after snapping, dries up and disintegrates. A new spear does not come up at the same spot, but comes up from another bud that enlarges on another part of the crown.  Asparagus is very perishable and should be harvested in the morning when air temperatures are cool. After picking, immerse the spears in ice-cold water to remove the heat; then drain the water and place the spears in plastic bags. Store in the refrigerator for 1 – 2 weeks.

Boil or steam immature heads until tender. Drain and remove the leaf scales one by one.  Dip them in melted butter, vinaigrette or Hollandaise sauce and then suck out the juicy flesh from each scale.  Finish off with the succulent base. Mature flowers take longer to cook and are less flavoursome, but can be cooked and consumed in the same way. Delicious!

Artichokes are reported to contain the highest level of antioxidants of all vegetables!  They are a rich source of dietary fiber and an excellent source of vitamin C, Folic Acid and vitamin K.  Furthermore, artichokes are a rich in minerals like copper, calcium, potassium, iron, manganese and phosphorus.

Globe artichokes contain a number of phytonutrients, such as apigenin, cynarin, silymarin and luteolin.  These appear to have diuretic properties and accordingly, assist with detoxifying the liver, boosting gall bladder function and improving bile flow. They are widely used in traditional medicine as a remedy for water retention and liver ailments.  It is thought that they may aid digestion and stomach acidity. Globe artichokes also contain a lot of soluble fibre, so they won’t destabilise blood sugar levels.

Whisk together the oil, lemon juice and salt in a bowl and then set it aside. Working with one artichoke at a time, snap off tough outer leaves until the half-green-half-yellow leaves are exposed. Using a sharp knife, cut off the dark-green top until just the pale section remains. Using a paring knife, peel the dark-green layer from base and stem.  Trim the stem. Scrape out purple leaves and fuzzy choke using a spoon, and discard. Halve the artichoke lengthwise. Rub the artichoke with 1/2 a lemon as you work. Using a mandoline, cut the artichoke heart into paper-thin slices, and add to lemon-oil mixture; toss.

DID YOU KNOW:  Asparagus freezes well.

We use cookies on our website to give you the most relevant experience by remembering your preferences and repeat visits. By clicking “Accept All”, you consent to the use of ALL the cookies.
Cookie SettingsAccept All
Manage consent

This website uses cookies to improve your experience while you navigate through the website. Out of these, the cookies that are categorized as necessary are stored on your browser as they are essential for the working of basic functionalities of the website. We also use third-party cookies that help us analyze and understand how you use this website. These cookies will be stored in your browser only with your consent. You also have the option to opt-out of these cookies. But opting out of some of these cookies may affect your browsing experience.
Necessary Always Enabled
Necessary cookies are absolutely essential for the website to function properly. These cookies ensure basic functionalities and security features of the website, anonymously.
Functional
Functional cookies help to perform certain functionalities like sharing the content of the website on social media platforms, collect feedbacks, and other third-party features.
Performance
Performance cookies are used to understand and analyze the key performance indexes of the website which helps in delivering a better user experience for the visitors.
Analytics
Analytical cookies are used to understand how visitors interact with the website. These cookies help provide information on metrics the number of visitors, bounce rate, traffic source, etc.
Advertisement
Advertisement cookies are used to provide visitors with relevant ads and marketing campaigns. These cookies track visitors across websites and collect information to provide customized ads.
Others
Other uncategorized cookies are those that are being analyzed and have not been classified into a category as yet.
SAVE & ACCEPT