At first glance, it’s easy to think that your orchid might need a larger pot, simply because it appears to be root-bound.  However, the roots of these plants actually prefer to be tightly packed, so don’t misread tangled and overlapping roots to be a sign that the plant needs a larger pot.  It’s also normal for the roots to begin growing up out of the potting mixture. These are called air roots and they are not necessarily a sign that the plant needs re-potting.  Clear pots (which can then be placed into a pot holder) are a great choice for growing orchids, because they allow you to monitor the health of the all-important roots. A pot that has plenty of holes for drainage and ventilation will also ensure the roots of your phalaenopsis orchid are happy and healthy.

Since the roots of phalaenopsis orchids are accustomed to being exposed to the open air, regular potting soil or compost should not be used. Orchid mix is available for this purpose, but tree bark is also a good choice, as are clay pellets, pumice pebbles, perlite, coconut coir chips and sphagnum moss.  These mediums can be used either alone or in a blend. 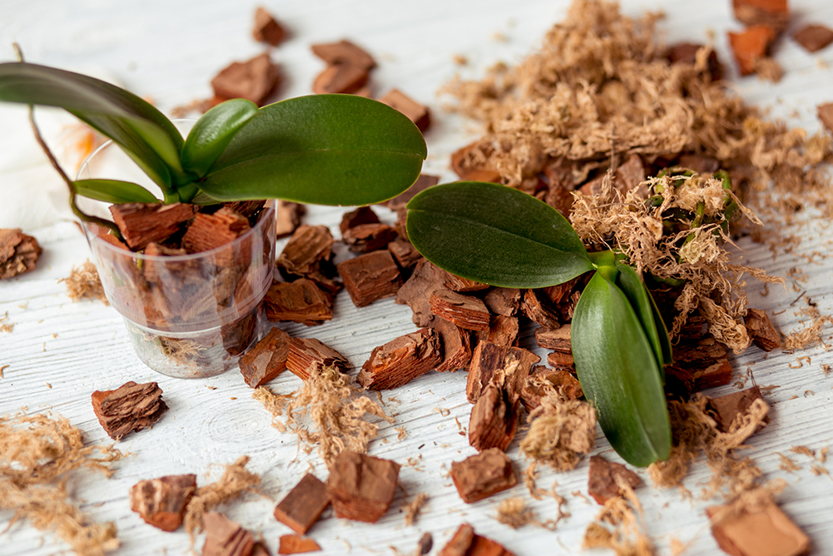 The re-potting of orchids must never take place during their blooming period.  It puts terrible stress on the plant, which is putting all its focus on flowering.  Once flowering is over, the plant turns its focus onto vegetative growth.  The best time to repot a phalaenopsis orchid is when new air roots begin to emerge, but after the plant has finished flowering.  When your orchid sends out a new set of air roots, it means that it is becoming acclimated to its new environment.  Repotting at this stage will mean a faster acclimation stage and the plant reaching the next flowering stage sooner.  Wait for the new air roots to be at least 1.5cm long before you repot and take extra care not to damage or break these new roots.

When choosing a new pot for your orchid, choose one that’s only slightly larger than the one your plant is currently in.  Choosing one that is too large will result in the roots working hard to fill the new space, thus spending the plant’s energy on this task, rather than on producing new growth.  This, in turn, will delay blooming.  You also want to ensure that the pot drains well, which can be somewhat delayed with too much potting mixture.

Removing your orchid from it’s original pot may prove a little tricky.  One of the main functions of orchid roots is to attach the plant to a substrate, so it roots may be difficult to pry away from the pot.  To make this a little easier, try soaking the orchid in its pot in water for 5 minutes before gently easing it.

Once you have removed your orchid from the old pot, assess and remove any roots that look damaged or unhealthy, remembering to take care not to damage any of the air roots.  To determine healthy roots, look for those that are thick, white and firm. Unhealthy roots will appear black or brown and feel soft or slimy. Roots that are a pale gray colour can indicate dehydration.  Remove unhealthy roots with a sharp, clean (preferably sterilized) blade or pair of pruning shears.

When transferring your orchid to its new pot, gently spread the roots out a little bit. Make sure the base of the stem is roughly level with the top of the new pot and ensure that the leaves and aerial roots remain above the growing medium.  Gently add the new potting mixture, taking care to fill in all the spaces between the roots.  Try to avoid large air pockets, but at the same time, don’t compact the medium too much.  Leave a gap between the medium and the top of the pot of about 2cm to allow for easier watering.

Let your newly planted orchid rest for a day or two before watering and then enjoy watching it adjust to its new home.

We use cookies on our website to give you the most relevant experience by remembering your preferences and repeat visits. By clicking “Accept All”, you consent to the use of ALL the cookies.
Cookie SettingsAccept All
Manage consent

This website uses cookies to improve your experience while you navigate through the website. Out of these, the cookies that are categorized as necessary are stored on your browser as they are essential for the working of basic functionalities of the website. We also use third-party cookies that help us analyze and understand how you use this website. These cookies will be stored in your browser only with your consent. You also have the option to opt-out of these cookies. But opting out of some of these cookies may affect your browsing experience.
Necessary Always Enabled
Necessary cookies are absolutely essential for the website to function properly. These cookies ensure basic functionalities and security features of the website, anonymously.
Functional
Functional cookies help to perform certain functionalities like sharing the content of the website on social media platforms, collect feedbacks, and other third-party features.
Performance
Performance cookies are used to understand and analyze the key performance indexes of the website which helps in delivering a better user experience for the visitors.
Analytics
Analytical cookies are used to understand how visitors interact with the website. These cookies help provide information on metrics the number of visitors, bounce rate, traffic source, etc.
Advertisement
Advertisement cookies are used to provide visitors with relevant ads and marketing campaigns. These cookies track visitors across websites and collect information to provide customized ads.
Others
Other uncategorized cookies are those that are being analyzed and have not been classified into a category as yet.
SAVE & ACCEPT